How can we help you today?

Why should I use an MCU/SFU? Print

In a strict Peer-to-Peer (P2P) interaction, each peer sends data to and receives data from each remote peer. This is known as a "P2P full mesh". 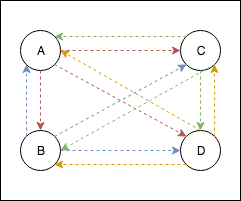 As illustrated above, in multi-party calling/conferencing, the number of media streams sent and received increases exponentially with each additional peer. The ability of the peers to process these streams is extremely limited and quickly exhausted in this mode.

In a scenario where MCU/SFU is in use, each peer sends streams directly to the MCU/SFU which, in its act of replicating and redistributing these inbound streams, reduces client side load and bandwidth utilisation. 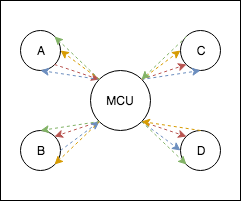 The use of an MCU/SFU helps to increase the number of peers that can participate in a call / interaction, by taking some of the processing load off of the peers and performing that work on the server.
Typically, we advocate the enabling of Skylink Media Relay for interactions involving over 4 peers.

The MCU also introduces the concept of media processing which involves our recording and archiving functionality.

What is MCU/SFU/Skylink Media Relay?

How can I check if MCU connectivity is enabled?

How is MCU/SFU Bandwidth measured and billed?

Six Things You Need To Know About WebRTC SFUs.

Did you find it helpful? Yes No

Send feedback
Sorry we couldn't be helpful. Help us improve this article with your feedback.